After spending five-years as the nearly-man of poker, the Frenchman, Ludovic Lacay, has finally managed to find an engraver willing to etch his name on one of the world’s major titles, after winning the European Poker Tour (EPT), Season Nine, Leg Two, in San Remo Italy.

Lacay's victory takes his overall career earnings to just shy of $3 million, according to the latest Poker News, moving him into sixth place in the French all-time money list.

The event drew in 797 of the world’s top players, and they combined to create a total prizepool of €3,865,450. It was the smallest EPT San Remo field since the event was first created in Season Four, an event that was won by Jason Mercier, but Lacay won't care about that.

After the mad rush of the combined Days 1a and 1b, Inge Forsmo would emerge as the Day 2 chip leader. The relatively unknown Norwegian would hold that chip lead until the end of Day 4 when the Irishman, Jason Tompkin, took charge.

There were 24-players at that point in proceedings; Lacay was sitting in third and that man, Forsmo, was seated in second.

The fight towards the final table saw a Canadian leap to the front. Jason Lavallee, who finished second in the 2009 WPT Festa al Lago for $795,150 took centre stage, as the final eight converged under the glare of the spotlight; Lacay was prowling in second spot.

After the end of the sixth day of action, it came down to a heads-up encounter between Lavallee and Lacay. Lacay's top two-pair staying ahead of the flush draw of Lavallee to hand Lacay his first-major title and €744,910 in prize money.

Looking to get started on the poker circuit? Find out about Sit and Go Tournaments in your area. 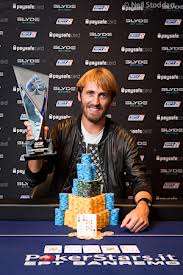